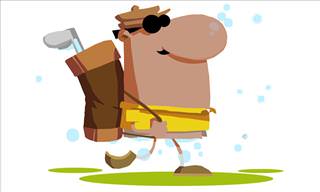 "How was your golf game, dear?" asked Jack's wife. "Well I was hitting pretty well, but my eyesight's gotten so bad I couldn't see where the ball went." "Well you're 75 years old now, Jack, why don't you take my brother Scott along?" suggested his wife. "But he's 85 and doesn't even play golf anymore," protested Jack. "But he's got perfect eyesight. He could watch your ball." his wife pointed out. The next day Jack teed off with Scott looking on. Jack swung, and the ball disappeared down the middle of the fairway. "Do you see it?" asked Jack. "Yup," Scott answered. "Well, where is it?" yelled Jack, peering off into the distance. "I forgot."
senior senior joke senior couple golf middle distance forgot suggested peering yelled play golf fairway
Dislike Like
If You Can't Count On Family 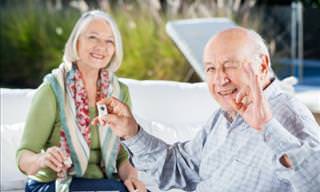 Joshua calls his son in NY and says, "Benny, I have something to tell you. However, I don't want to discuss it. I'm merely telling you because you're my oldest child, and I thought you ought to know. I've made up my mind, I'm divorcing Mama." The son is shocked, and asks his father to tell him what happened. "I don't want to get into it. My mind is made up." "But Dad, you just can't decide to divorce Mama just like that after 54 years together. What happened?" "It's too painful to talk about it. I only called because you're my son, and I thought you should know. I really don't want to get into it anymore than this. You can call your sister and tell her. It will spare me the pain." "But where's Mama? Can I talk to her?" "No, I don't want you to say anything to her about it. I haven't told her yet. Believe me it hasn't been easy. I've agonized over it for several days, and I've finally come to a decision. I have an appointment with the lawyer the day after tomorrow." "Dad, don't do anything rash. I'm going to take the first flight down. Promise me that you won't do anything until I get there." "Well, all right, I promise. Next week is a holiday. I'll hold off seeing the lawyer until after the holiday meal. Call your sister in NJ and break the news to her. I just can't bear to talk about it anymore." A half hour later, Joshua receives a call from his daughter who tells him that she and her brother were able to get tickets and that they and the children will be arriving in Florida the day after tomorrow. "Benny told me that you don't want to talk about it on the telephone, but promise me that you won't do anything until we both get there." Joshua promises. After hanging up from his daughter, Joshua turns to his wife and says, "You were right! They're coming, and we don't even have to pay our half of the tickets!"
senior senior joke family couple divorce senior couple family joke
Dislike Like
Contact us | Help | About us | Terms | Privacy policy | Categories | Collections