Shenanigans in a Dark Tunnel 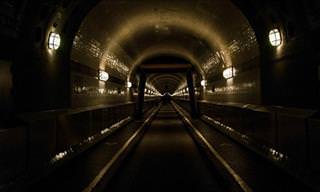 Our story starts a few years ago, as a train is speeding along through the city. Four people sit in one of its compartments: A beautiful, vivacious young woman, an old, matronly woman, a poor man and a rich man. Suddenly, the train goes through a tunnel. It is completely dark. Then a loud kiss and an equally powerful slap are heard. When the train exits the tunnel, the rich man is holding the side of his face in agony, while the poor man is grinning uncontrollably. The old matronly woman thinks: "Now that's a fine young woman, the poor man tries to steal a kiss in the tunnel and the lady slaps him one – and rightly so!" The young woman thinks: "Now that's a strange rich man - he'd rather kiss that old hag than me." The rich man thinks: "Now that's a smart poor man, he steals a kiss and I’m the one who gets slapped." The poor man is thinking: "Good, soon we'll be entering another tunnel, I'll kiss the back of my hand again and slap that millionaire silly!”
political joke rich man train poor man
Rate: Dislike Like
Want to start your day laughing? Register to our Daily Joke! Want to start your day laughing? Register to our Daily Joke!
Did you mean:
Continue With: Facebook Google
By continuing, you agree to our T&C and Privacy Policy
Contact us | Help | About us | Terms | Privacy policy | Categories | Collections