Baseball Puns
Why was the mummy added to the game as a pinch hitter?
Because the manager knew he could wrap it up.
Jokes For Women
A third-grade teacher is getting to know her pupils on the first day of school.
She turns to one little girl and says, ‘And what does your daddy do?’
The girl replies, ‘Whatever Mummy tells him to.’ 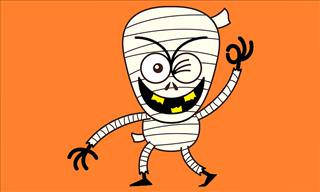 An archaeologist was digging in the Negev Desert in Israel and came upon a casket containing a mummy, a rather rare occurrence in Israel, to say the least. After examining it, he called Abe, the curator of the Israel Museum in Jerusalem. "I've just discovered a 3,000-year-old mummy of a man who died of heart failure!" the excited scientist exclaimed. Abe replied, "That's not something you can just determine on hand! Bring him in. We'll check it out." A week later, the amazed Abe called the archaeologist. "You were right about both the mummy's age and cause of death. How in the world did you know?" "Easy. There was a piece of paper in his hand that said, '10,000 Shekels on Goliath'."
religion joke Israel mummy Goliath
Rate: Dislike Like
Want to start your day laughing? Register to our Daily Joke! Want to start your day laughing? Register to our Daily Joke!
Did you mean:
Continue With: Facebook Google
By continuing, you agree to our T&C and Privacy Policy
Contact us | Help | About us | Terms | Privacy policy | Categories | Archive | Collections