101 Jokes and One Liners for Kids!
Jokes > Tags > Hogging Jokes 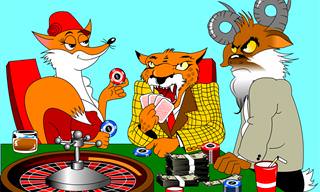 In a part of Las Vegas humans don't know about, a group of animals are playing cards in Las Vegas... and arguing. Lion: "Stop taking glances at my card, you're a cheetah!" Cheetah: "No, you're a Lion!" Warthog: "You guys are just ignoring the guy with the super long nose who can suck up cards while nobody notices." Elephant: "Well I wouldn't be so hungry for cards if you weren't HOGGING all the wings!" Warthog: "Tell that to the dude who thinks eating them will make him fly." Ostrich: "You can't talk, you snort off of the table. Also, will we just ignore the fact that one guy ate all the bananas?" Monkey: "Give me a break, I can't even get dinner protein after they fixed all the bugs in the slot machines." Giraffe: "Why don't you just steal leftovers from random plates like I do? You just lean over." The Dog at the table looks at all of them and rolls his eyes. "Ugh, I knew I should have played with my usual crowd!"
dog animal joke monkey lion Las Vegas ostrich Elephant giraffe poker Cheetah wings warthog hogging
Rate: Dislike Like
Want to start your day laughing? Register to our Daily Joke! Want to start your day laughing? Register to our Daily Joke!
Did you mean:
Continue With: Facebook Google
By continuing, you agree to our T&C and Privacy Policy
Contact us | Help | About us | Terms | Privacy policy | Categories | Collections