Food puns
My decision to become a Hindu was a missed steak
Why can't the bankrupt Hindu complain? He's got no beef.

The Rabbi, Holy Man and the Lawyer 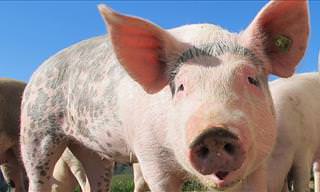 Three friends, a Rabbi, a Hindu holy man and a lawyer, had car trouble in the countryside and asked to spend the night with a farmer. The farmer said, "There might be a problem; you see, I only have room for two to sleep, so one of you must sleep in the barn." "No problem," chimed the Rabbi, "My people wandered in the desert for forty years, I am humble enough to sleep in the barn for an evening in their memory." With that he departed to the barn and the others bedded down for the night. Moments later a knock was heard at the door; the farmer opened the door. There stood the Rabbi from the barn. "What's wrong?" asked the farmer. He replied, "I am grateful to you, good sir, but I can't sleep in the barn. There is a pig in the barn and my faith believes that is an unclean animal." His Hindu friend agreed to swap places with him. But a few minutes later the same scene reoccurred. There was a knock on the door. "What's wrong, now?" the farmer asked. The Hindu holy man replied, "I too am grateful for your helping us out but there is a cow in the barn and in my country cows are considered sacred. I can't sleep on holy ground!" Well, that left only the lawyer to make the change. He grumbled and complained, but went out to the barn. Moments later there was another knock on the farmers door. Frustrated and tired, the farmer opened the door, and there stood... The pig and the cow.
religion farmer joke rabbi lawyer joke cow pig hindu
Rate: Dislike Like
Spice Puns
If my Hindu girlfriend thinks I'm going to eat Indian food, she has another think cumin.
Want to start your day laughing? Register to our Daily Joke! Want to start your day laughing? Register to our Daily Joke!
Did you mean:
Continue With: Facebook Google
By continuing, you agree to our T&C and Privacy Policy
Contact us | Help | About us | Terms | Privacy policy | Categories | Archive | Collections
Login
Already registered?
Enter your email address and get full access.
Did you mean:
Not a member? Click Here
Personal Details