My Beer Is Better 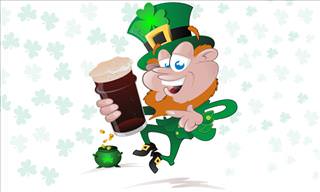 At a World Brewing Convention in the United States, the CEOs of various brewing organizations retired to the bar at the end of each day's conferencing. Bruce, the boss of Fosters, shouted to the barman, 'in 'Strailya, we make the best bloody beer in the world, so pour me a Fosters, cobber.' Rob, chief of Budweiser, calls out, 'In the States, we brew the finest beers of the world, and I make the king of them all. Give me a pint of Bud.' Hans steps up next, 'In Germany we invented beer. Give me a Beck's, the real king of beers.' Up steps Dutchman Jan, chief executive of Grolsch, who states that Grolsch is the ultimate beer and asks for one with two fingers of head on top. Patrick, the CEO of Guinness, steps forward. 'Barman, give me a coke with ice please.' The other four stare at him in stunned silence with amazement written all over their faces. Eventually, Bruce asks, 'Are you not going to have a Guinness, Pat?' Patrick replies, 'Well, if you lot aren't drinking, then neither am I.'
bar joke Irish joke Guinness beer
Rate: Dislike Like
Want to start your day laughing? Register to our Daily Joke! Want to start your day laughing? Register to our Daily Joke!
Did you mean:
Continue With: Facebook Google
By continuing, you agree to our T&C and Privacy Policy
Contact us | Help | About us | Terms | Privacy policy | Categories | Collections