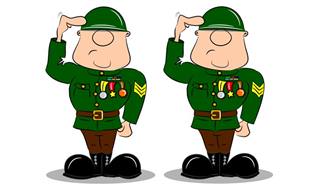 A new general was allotted to a new army base. After some time in the base he realized how there were two army men guarding an empty bench in shifts. He asked his colleagues and his juniors what it was all about. A colleague said “I don’t know but it’s been a tradition here since joined 35 years ago.” The general confused as he was went through the past generals of that base till he found the one that was in charge 35 years ago. He attempted to find him, and found that he had retired and he lived in the countryside now. He contacted him and requested to meet. On the day of the meeting the general asked the retired commander why that bench was guarded so much. The commander was shocked. “So you’re telling me the paint on that bench hasn’t dried yet?!”
general army joke confused bench base commander in charge guarding guarded
Rate: Dislike Like
Want to start your day laughing? Register to our Daily Joke! Want to start your day laughing? Register to our Daily Joke!
Did you mean:
Continue With: Facebook Google
By continuing, you agree to our T&C and Privacy Policy
Contact us | Help | About us | Terms | Privacy policy | Categories | Collections