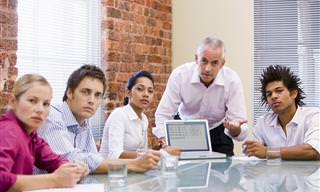 A Japanese company and a Swedish company decided to have a row competition as a publicity stunt. Both teams trained long and hard. Competition came and the Japanese won by 1 kilometer. The Swedish company's leadership was shocked. But in this major crisis, the leadership showed its value: They wanted a rematch next year so they could save face. The other company agreed. Right away, the Swedish team started to examine the reason they lost. The company created a special task force. After a lengthy examination for several months, the report was submitted that it appeared the Japanese team had one person at the helm and the rest were rowing. On the Swedish team, one person was rowing as the rest were at the helm. After this report, the company decided to hire a consultant to solve the issue. After experts went through the findings of the task force for a few months the judgment was clear: there were too few people rowing and too many people at the helm. Armed with this knowledge, the Swedish company took swift action and the result was that there would be 2 steersmen, 2 senior steersmen, a captain and a rower. In addition, the rower was enrolled in a bonus scheme system to motivate him for better results. So a year went by and it was time for the rematch. Surprisingly, the Japanese won again, this time by 3 kilometers! The Swedish company management knew exactly what to do. They fired the rower due to poor performance, got large bonuses for all managers for their initiative in trying to solve the issue and for next year, they decided they would try to design a better boat.
business joke competition japanese swedish sports consultant rowing steersmen
Rate: Dislike Like
Want to start your day laughing? Register to our Daily Joke! Want to start your day laughing? Register to our Daily Joke!
Did you mean:
Continue With: Facebook Google
By continuing, you agree to our T&C and Privacy Policy
Contact us | Help | About us | Terms | Privacy policy | Categories | Archive | Collections