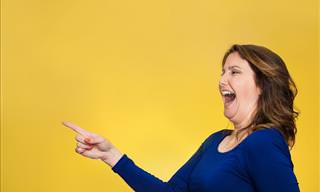 1. Arnold Schwarzenegger: "I think gay marriage is something that should be between a man and a woman." 2. Mariah Carey: "Whenever I watch TV and see those poor starving kids all over the world, I can't help but cry. I mean I'd love to be skinny like that, but not with all those flies and death and stuff." 3. Brooke Shields: "Smoking kills. If you're killed, you've lost a very important part of your life." 4. Paris Hilton: "What's Walmart, do they sell, like, wall stuff?" 5. Jessica Simpson: "Is this chicken what I have, or is this fish? I know it's tuna but it says Chicken by the Sea." 6. Britney Spears: "I get to go overseas places, like Canada." 7. Britney Spears again: "I've never really wanted to go to Japan. Simply because I don't like eating fish. And I know that's very popular out there in Africa." 8. George W. Bush: "Rarely is the question asked, is our children learning?" 9. Alicia Silverstone: "I think that the film Clueless was very deep. I think it was deep in the way that it was very light. I think lightness has to come from a very deep place if it's true lightness." 10. Victoria Beckham: "I don't know much about football. I know what a goal is, which is surely the main thing about football." 11. David Beckham: "I definitely want Brooklyn to be christened, but I don't know into what religion yet." 12. Axl Rose: "It's really hard to maintain a one-on-one relationship if the other person is not going to allow me to be with other people."
stupidity joke george bush funny celebrity quotes britney spears paris hilton jessica simpson brooke shields
Rate: Dislike Like
Want to start your day laughing? Register to our Daily Joke! Want to start your day laughing? Register to our Daily Joke!
Continue With: Facebook Google Use Email
By continuing, you agree to our T&C and Privacy Policy
Contact us | Help | About us | Terms | Privacy policy | Categories | Collections