The Priest, the Angel and the Perfect Golf Swing 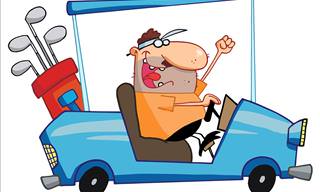 There was this preacher who was an avid golfer. Every chance he could get, he could be found on the golf course swinging away. It was an obsession. One Sunday was a picture perfect day for golfing. The sun was out, no clouds in the sky, and the temperature was just right. The preacher was in a quandary as to what to do, and shortly, the urge to play golf overcame him. He called an assistant to tell him that he was sick and could not do church, packed the car up, and drove three hours to a golf course where no one would recognize him. Happily, he began to play the course. As this was going on, an angel up above was watching the preacher and was quite perturbed. He went to God and said, "Look at the preacher. He should be punished for what he is doing." God nodded in agreement. The preacher teed up on the first hole. He swung at the ball, and it sailed effortlessly through the air and landed right in the cup three hundred and fifty yards away! A picture perfect hole-in-one. He was amazed and excited, his mouth open in shock. The angel was a little shocked as well. He turned to God and said, "Begging Your pardon, but I thought you were going to punish him." God smiled. "Think about it... who is he going to tell?!?"
religion angel priest God golf temperature clouds assistant hole in one pardon begging punish quandary
Rate: Dislike Like
Want to start your day laughing? Register to our Daily Joke! Want to start your day laughing? Register to our Daily Joke!
Did you mean:
Continue With: Facebook Google
By continuing, you agree to our T&C and Privacy Policy
Contact us | Help | About us | Terms | Privacy policy | Categories | Archive | Collections