Two Stupids Chase After An Indian 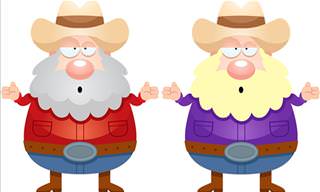 Back in the old Wild West, there were two stupid scoundrels, Jeff and Dave. One day, the two were enjoying a strong sasparilla in the local saloon, when a man walked into the bar with an Indian's head under his arm. The barman shakes his hand and says, "I hate Indians; last week the bastards burnt my barn to the ground." He then says, "If any man brings me an Indian’s prized horse, I'll give him $1000." The two men looked at each other, walked out of their bar and mounted their horses. It wasn’t long before they saw an Indian, so they caught up to him and pushed him off his horse. He fell into a ravine, but the loyal horse followed him right down there. The two nuts scrambled to follow it down to the bottom to try and catch it. Suddenly, Jeff said, "Dave, look at this!" Dave replied, "Not now – can’t you see I’m trying to catch a prized horse!?” Jeff shouted again, breathlessly: "I really think you should look at this." “Why don’t you help me try and make $1000 instead of goofing off?” But Jeff was adamant. "Please, just take a damn look!” So Dave stopped running, looked up and saw that standing at the top of the ravine were five thousand red Indians – and their horses. Dave just shook his head and said, "Oh . . . my . . . God . . . we're going to be millionaires!"
horse stupidity joke wild west indians native americans
Dislike Like
Contact us | Help | About us | Terms | Privacy policy | Categories | Collections