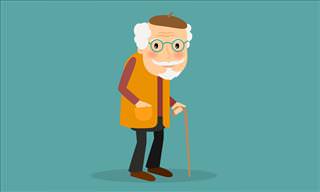 Grandpa was celebrating his 100th birthday and everybody complimented him on how athletic and well-preserved he appeared. "Gentlemen, I will tell you the secret of my success," he cackled. "I have been in the open air day after day for some 75 years now." The celebrants were impressed and asked how he managed to keep up his rigorous fitness regime. He replied, "Well, you see my wife and I have married 75 years ago. On our wedding night, we made a solemn pledge. "Whenever we had a fight, the one who was proved wrong would go outside and take a walk."
marriage joke grandfather take a walk
Rate: Dislike Like
Want to start your day laughing? Register to our Daily Joke! Want to start your day laughing? Register to our Daily Joke!
Did you mean:
Continue With: Facebook Google
By continuing, you agree to our T&C and Privacy Policy
Contact us | Help | About us | Terms | Privacy policy | Categories | Collections