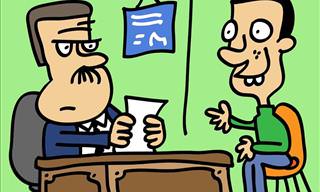 Tim was in a terrible accident at work. He fell through a floor tile and ripped off both of his ears. Since he was permanently disfigured, he settled with the company for a rather large sum of money and went on his way. One day, Tim decided to invest his money in a small, but growing telecom business called Plexus Communications. After weeks of negotiations, he bought the company outright. But, after signing on the doted line he realized that he knew nothing about running such a business and quickly set out to hire someone who could do that for him. The next day he had set up three interviews. The first guy was great. He knew everything he needed to and was very interesting. At the end of the interview, Tim asked him, "Do you notice anything different about me?" And the gentleman answered, "Why yes, I couldn't help but notice you have no ears." Tim got very angry and threw him out. The second interview was with a woman, and she was even better than the first guy. He asked her the same question, "Do you notice anything different about me?" and she replied: "Well, you have no ears." ​Tim again was upset and tossed her out. The third and last interview was the best of all three. It was with a very young man who was fresh out of college. He was smart. He was handsome and he seemed to be a better businessman than the first two put together. Tim was anxious, but went ahead and asked the young man the same question: "Do you notice anything different about me?" And to his surprise, the young man answered: "Yes. You wear contact lenses." Tim was shocked, and said, "What an incredibly observant young man. How in the world did you know that?" The young man fell off his chair laughing hysterically and replied, "Well, glasses would fall right off wouldn't they?"
business joke accident job interview no ears
Rate: Dislike Like

Jim Thinks He Can Get Any Job 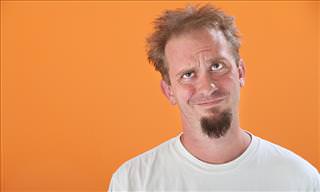 Jim needs a job, and has no qualms about inventing the necessary qualifications. He reasons that once he finds work, he will impress the boss so much that everything will be forgiven. After a successful initial interview at the Encyclopedia of American History, he is called back to meet the sales manager. "You say you have experience selling books?" "Lots of it," replies Jim. "And you have a Master's in American history from the University of Michigan?" "Correct," replies Jim. "History is my field of study." "Well then," says the sales manager, "As soon as I can complete this form, we can get you started in the firm." While the sales manager is making a few notations, Jim, obviously pleased with himself, begins to whistle. Looking around the room, he notices pictures of Washington and Lincoln on the walls. Pointing to the portraits, he turns to the sales manager and says, "Fine looking men. Your partners?"
business joke job interview stupidity joke
Rate: Dislike Like

A Young Programmer Has an Interview 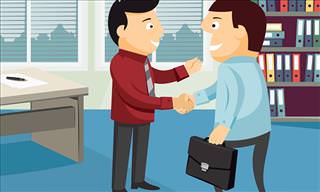 Reaching the end of a job interview, the human resources person asked the young programmer: "And what starting salary were you looking for?" The programmer said, "In the neighborhood of $75,000 a year, depending on the benefits package." The HR Person said, "Well, what would you say to a package of 5 weeks vacation, 14 paid holidays, full medical and dental, company matching retirement fund to 50% of salary, and a company Corvette leased every 2 years?" The programmer sat up straight and said, "Wow!!! Are you kidding?" "Certainly... but you started it."
business joke job interview HR
Rate: Dislike Like
Want to start your day laughing? Register to our Daily Joke! Want to start your day laughing? Register to our Daily Joke!
Did you mean:
Continue With: Facebook Google
By continuing, you agree to our T&C and Privacy Policy
Contact us | Help | About us | Terms | Privacy policy | Categories | Archive | Collections
Login
Already registered?
Enter your email address and get full access.
Did you mean:
Not a member? Click Here
Personal Details