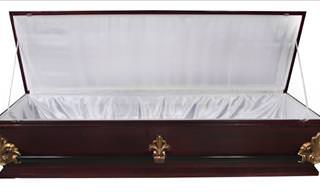 Margaret was very upset as her husband Albert had just passed away. She went to the undertaker's to have one last look at her dearly departed husband. The instant she saw him she started crying. One of the undertakers strides up to provide comfort in this somber moment. Through her tears she explains that she is upset because her dearest Albert was wearing a black suit, and it was his dying wish to be buried in a blue suit. The undertaker apologizes and explains that traditionally, they always put the bodies in a black suit, but he'd see what he could arrange. The next day she returned to the undertakers to have one last moment with Albert before his funeral the following day. When the undertaker pulls back the curtain, she managed to smile through her tears as Albert is resplendent in a smart blue suit. She said to the undertaker "Wonderful, wonderful, but where did you get that beautiful blue suit?" "Well, yesterday afternoon after you left, a man about your husband's size was brought in & he was wearing a blue suit. His wife explained that she was very upset as he had always wanted to be buried in a black suit," the undertaker replied. The wife smiled at the man. He continued, "After that, it was simply a matter of swapping the heads."
silly joke funeral joke gruesome heads undertaker
Rate: Dislike Like
Want to start your day laughing? Register to our Daily Joke! Want to start your day laughing? Register to our Daily Joke!
Did you mean:
Continue With: Facebook Google
By continuing, you agree to our T&C and Privacy Policy
Contact us | Help | About us | Terms | Privacy policy | Categories | Collections