The Three Couples and Their Honeymoon 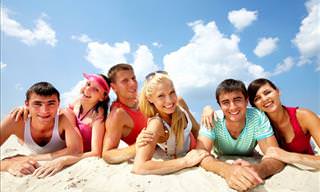 Three couples check into a hotel for their honeymoons. The man at the front desk has a game he likes to play. When the first couple checked in, he asked the bride what her job was. She said she was a maid. The man thought to himself "Maids are hot. This guy's going to have a fun honeymoon." When the next couple checked in, he asked the bride the same question. She told him she was a nurse. The man at the front desk thought "nurses are even sexier. This guy's going to get laid." The third couple checked in right after. The same question was asked. The bride said she was a high school teacher. The man behind the desk scoffed. "Teachers are so strict." He thought. "They'll probably go right to bed." Just an hour later, the first groom came down to eat. "Already? I thought you'd be spending the night with your new wife." Said the man "I tried!" Replied the groom. "But she insisted on tidying up the room." Another hour passed, and the second groom came down to get some food. The man asked "What are you doing down here so early?" And the groom said "Every time I tried to make love to her, she just told me I wasn't clean enough." The man expected the third groom to come down soon, but he never did. He waited for hours and how's. Right near the end of his shift, the man finally saw the third groom come down, looking extremely tired. "There you are!" Said the man. "Did you get enough sleep?" "I never slept." Replied the groom. "My wife kept saying "We're going to do this again and again until you get it right."
teacher marriage joke nurse maid lovemaking joke hotel honeymoon groom game play front desk
Rate: Dislike Like
Want to start your day laughing? Register to our Daily Joke! Want to start your day laughing? Register to our Daily Joke!
Did you mean:
Continue With: Facebook Google
By continuing, you agree to our T&C and Privacy Policy
Contact us | Help | About us | Terms | Privacy policy | Categories | Collections