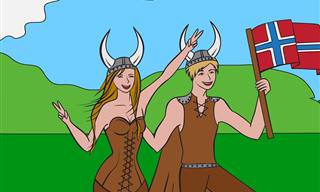 Long ago, Olaf Swenson, out in his pasture in the ancient North, took a lightning-quick kick from a cow... right in his crotch; writhing in agony, he fell to the ground. As soon as he could manage, he took himself to the village doctor. He said, "How bad is it Doc? I'm getting married next veek and my fiance, Lena, is still a virgin - in every vay." "Well I'll have to put it in a splint to let it heal, and keep it straight." Said the doctor. "It should be okay next veek, but leave it on dere as long as you can." He took four tongue depressors and formed a little 4 sided splint, and roped it all together. Quite an impressive work of art for those times. Olaf mentioned none of this to Lena, married her, and celebrated all night drinking. After the feast, he carried her to his house. As they got inside, Lena ripped open her blouse to reveal her beautiful, untouched breasts. She said, "Olaf...you're the first vun! NO vun has EVER seen deez." Olaf dropped his pants and replied, "Look at dis Lena. Still in DA CRATE!"
rude joke doctor wedding cow genitals viking north europe crotch splint crate tongue depressor olaf
Rate: Dislike Like
Want to start your day laughing? Register to our Daily Joke! Want to start your day laughing? Register to our Daily Joke!
Did you mean:
Continue With: Facebook Google
By continuing, you agree to our T&C and Privacy Policy
Contact us | Help | About us | Terms | Privacy policy | Categories | Collections