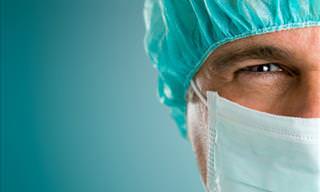 A woman pregnant with triplets was walking down the street when a masked robber ran out of a bank and shot her three times in the stomach. Luckily the babies were alright. The surgeon decided to leave the bullets in because it was too risky to operate. She gave birth to two healthy daughters and a healthy son. All was fine for 16 years, and then one daughter walked into the room in tears. 'What's wrong?' asked the mother. 'I was taking a tinkle and this bullet came out,' replied the daughter. The mother told her it was okay and explained what happened 16 years ago. About a week later the second daughter walked into the room in tears. 'Mom, I was taking a tinkle and this bullet came out.' Again the mother told her not to worry and explained what happened 16 years ago. A week later her son walked into the room in tears. 'It's okay' said the Mom, 'I know what happened. You were taking a tinkle and a bullet came out.' 'No,' said the son, 'I was playing with myself and accidentally shot the dog.'
rude joke doctor joke bullet surgeon
Rate: Dislike Like
Anti Jokes
What leaves a bigger hole in your heart than breaking up with your girlfriend?
A bullet.
Puns
What do you call a bullet proof Irishman?
Rick O'Shea.
Gun Puns
A sad bullet comes home to his family.
"Honey you look terrible!" Exclaims his wife. "What happened?"
"I got fired."
Contact us | Help | About us | Terms | Privacy policy | Categories | Collections