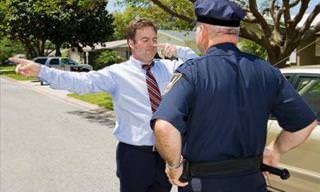 A guy gets pulled over by the police, “Step out of the car” says the cop, “I am going to need you to take a breathalyzer test.” “I can’t”, the guy says. “I have very bad asthma, that can set off an attack.” “Alright,” says the cop, “then you’re going to have to take a blood test.” “Can’t do that either,” Jim replies, “I am a hemophiliac, if a wound is opened, I won’t stop bleeding, and I could bleed to death.” “Okay,” the cop answers. “Then I will need a urine sample.” “Sorry,” says Jim. “I also have diabetes, that could push my sugar count really low.” “Fine, so just come on out, and walk a straight line for me.” “I can’t do that either.” responds Jim. “Why not?” asks the cop. “Because I'm completely drunk! I could go to jail!"
drunk joke police joke breathalyzer test
Rate: Dislike Like
A Hot Blonde Gets Pulled Over 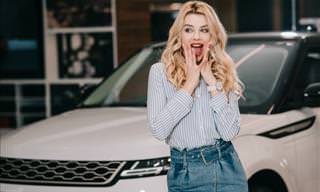 One day while on patrol, a police officer pulled over a car for speeding. He went up to the car and asked the driver to roll down her window. The first thing he noticed, besides the nice red sports car, was how hot the driver was! Blue eyes, blonde, the works. "I've pulled you over for speeding, Ma'am. Could I see your drivers license?" "What's a license?" replied the blonde, instantly giving away the fact that she was as dumb as a stump. "It's usually in your wallet," replied the officer. After fumbling for a few minutes, the driver managed to find it. "Now may I see your registration?" asked the cop. "Registration..... what's that?" asked the blonde. "It's usually in your glove compartment," said the cop impatiently. After some more fumbling, she found the registration. "I'll be back in a minute." said the cop and walked back to his car. The officer called in to the dispatch to run a check on the woman's license and registration. After a few moments, the dispatcher came back, "Ummm... is this woman driving a red sports car?" "Yes." replied the officer "Is she a drop dead gorgeous blonde?" asked the dispatcher. "Uh... yes." replied the cop. "Here's what you do," said the dispatcher. "give her the stuff back, and drop your pants." "What? I can't do that. It's... inappropriate." exclaimed the cop. "Trust me. Just do it." said the dispatcher, a smile in his voice So the cop goes back to the car, gives back the license and registration and drops his pants, just as the dispatcher said. The blonde looks down and sighs..... "Ohh no... not another breathalyzer..."
blond joke cop police joke speeding police dumb glove fumbling breathalyzer compartment stump
Rate: Dislike Like
I Can't Do That, Officer 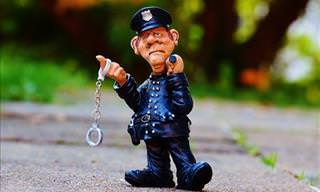 A police officer pulls over this guy who had been weaving in and out of the lanes. He goes up to the guy's window and says, "Sir, I need you to blow into this breathalyzer tube." The man says, "Sorry officer I can't do that. I am an asthmatic. If I do that I'll have a really bad asthma attack." "Okay, fine." Sighs the office. "I need you to come down to the station to give a blood sample." "I can't do that either. I am a hemophiliac." Says the man. "If I do that, I'll bleed to death." "Well, then we need a urine sample." "I'm sorry officer I can't do that either. I am also a diabetic. If I do that I'll get really low blood sugar." "Alright then I need you to come out here and walk this white line." "I can't do that, officer." "Why not?" "Because I'm too drunk."
cop police police officer drunk window urine sample breathalyzer diabetes hemophiliac white line blood sample
Rate: Dislike Like
The Drunk Driver and the Police Officer 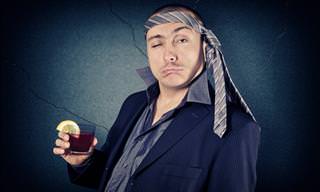 Recently a routine police patrol was parked outside a bar in the Outback. After last call, the officer noticed a man leaving the bar so apparently intoxicated that he could barely walk. The man stumbled around the parking lot for a few minutes, with the officer quietly observing. After what seemed an eternity, in which he tried his keys on five different vehicles, the man managed to find his car and fall into it. He sat there for a few minutes as a number of other patrons left the bar and drove off. Finally, he started the car, switched the wipers on and off; it was a fine, dry summer night, flicked the blinkers on and off a couple of times, honked the horn and then switched on the lights. He moved the vehicle forward a few inches, reversed a little, and then remained still for a few more minutes as some more of the other patrons' vehicles left. At last, when his was the only car left in the parking lot, he pulled out and drove slowly down the road. The police officer, having waited patiently all this time, now started up his patrol car, put on the flashing lights, and promptly pulled the man over and administered a breathalyzer test. To his amazement, the breathalyzer indicated no evidence that the man had consumed any alcohol at all! Dumbfounded, the officer said, "I'll have to ask you to accompany me to the police station. This breathalyzer equipment must be broken." "I doubt it," declared the man with pride. "Tonight I'm the designated decoy."
bar car joke police joke drunk driving driver
Rate: Dislike Like
Contact us | Help | About us | Terms | Privacy policy | Categories | Collections