A Doctor and His Wife "Go At It" 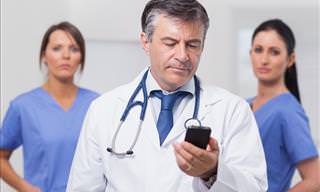 A doctor and his wife were having a big argument at breakfast. Things in the bedroom hadn’t been good for a while, so they were going at it over that. "You aren't so good in bed either!" he shouted and stormed off to work. He began his working day, and didn’t hear a peep from his wife. By mid-morning, he decided to make amends and phoned home. After many rings, his wife picked up the phone. "What took you so long to answer?" "I was in bed." "What were you doing in bed this late?" "I was getting a second opinion."
marriage joke cheating joke second opinion
Rate: Dislike Like
Want to start your day laughing? Register to our Daily Joke! Want to start your day laughing? Register to our Daily Joke!
Did you mean:
Continue With: Facebook Google
By continuing, you agree to our T&C and Privacy Policy
Contact us | Help | About us | Terms | Privacy policy | Categories | Collections