A Quarter in Heaven 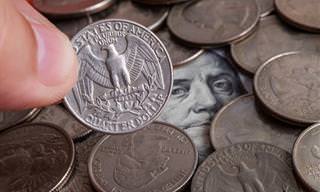 A quarter dies and goes to heaven. At his arrival at the gates of heaven, the Lord himself welcomes him while angels play the trumpets. The quarter doesn't believe his eyes as he is being given the most beautiful cloud of all whith riches and food and honey for eternity. The next day the one hundred dollar bill dies. He also rises to heaven but their doesn't appear to be anyone. He pushed the gate open by himself but behind it is nobody but one angel playing on his phone. The one hundred dollar bill asks for his cloud but is given a little filthy grey rainy cloud. As he tries to make himself comfortable in which is doesn't succeed, he sees the quarter on his right partying with all the angels at his enormous white cloud. Upset he goes to God himself to complain. "Why does the quarter get the best cloud while I get this stormy trash? I'm more valuable, right?", asks the one hundred dollar bill. But God responds: yeah, but you we didn't see that much in church.
religion joke God money heaven dollar quarter bill honey cloud comfortable angels eternity riches rainy
Rate: Dislike Like
Contact us | Help | About us | Terms | Privacy policy | Categories | Collections