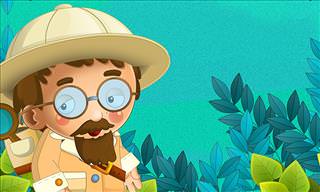 A famous British explorer was invited to a seaside town to give a talk about his adventures in the African jungle. “Can you imagine a people so primitive that they love to eat the embryos of a certain bird and slices of the belly of a certain animal?” the explorer asked the assembled audience. Its members gasped and looked around at each other in horror. “They also grind up grass seed, make it into a paste, burn it over a fire, then smear the result with a greasy mess that’s extracted from the mammary fluid of certain other animals,” the explorer continued. “Utterly barbaric! How can people live like that?” said a shocked individual. “All I’ve described is a breakfast of bacon, eggs and buttered toast, sir!” retorted the explorer. Moral of the story: Don't be quick to judge cultures before you understand your own!
jungle moral explorer culture primitive
Rate: Dislike Like
Want to start your day laughing? Register to our Daily Joke! Want to start your day laughing? Register to our Daily Joke!
Did you mean:
Continue With: Facebook Google
By continuing, you agree to our T&C and Privacy Policy
Contact us | Help | About us | Terms | Privacy policy | Categories | Collections