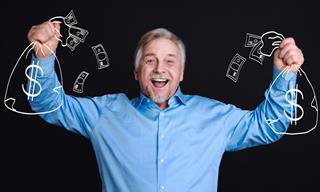 A stingy old lawyer who had been diagnosed with a terminal illness was determined to prove wrong the old saying, “You can’t take it with you.” After much thought and consideration, the old ambulance-chaser finally figured out how to take at least some of his money with him when he died. He instructed his wife to go to the bank and withdraw enough money to fill two pillowcases. He then directed her to take the bags of money to the attic and leave them directly above his bed. His plan: When he passed away, he would reach out and grab the bags on his way to heaven. Several weeks after the funeral, the deceased lawyer’s wife, up in the attic cleaning came upon the two forgotten pillowcases stuffed with cash. “Oh, that old fool,” she exclaimed. “I knew he should have had me put the money in the basement.”
wife lawyer joke money funeral fool attic moneybag pillowcase exclaim bank. withdraw deceased
Rate: Dislike Like
Want to start your day laughing? Register to our Daily Joke! Want to start your day laughing? Register to our Daily Joke!
Did you mean:
Continue With: Facebook Google
By continuing, you agree to our T&C and Privacy Policy
Contact us | Help | About us | Terms | Privacy policy | Categories | Archive | Collections