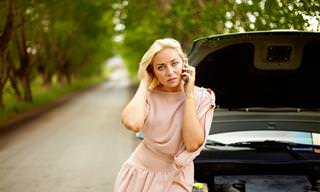 A blonde lived with two blonde roommates. She bought a new car, and on the way home from the dealer got caught in a terrible hail storm. Her brand new car was dented all over. When she got home she called the service department to ask what she should do. They offer to send the car to a mechanic but she'd have to pay for it. She tells them she has absolutely no money. Couldn't they just send someone anyway? The service chief, being a prankster, told her to wait till the car was cool and then blow hard on the tail pipe, which would pop out all the dents. A half-hour later her roomies saw her on her knees behind the car, blowing as hard as she could. They asked what the heck she was doing and she told them, adding in a perplexed tone “But it's not working”. “You dummy” one of her blond room mates said. “You have to roll up the windows first!“
blonde joke blond joke car joke stupidity joke perplexed
Rate: Dislike Like
Want to start your day laughing? Register to our Daily Joke! Want to start your day laughing? Register to our Daily Joke!
Did you mean:
Continue With: Facebook Google
By continuing, you agree to our T&C and Privacy Policy
Contact us | Help | About us | Terms | Privacy policy | Categories | Collections