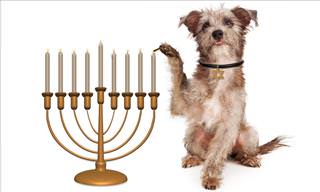 A guy gets a new dog, a nice Jewish dog. He names the dog Einstein and trains Einstein to do a couple of tricks. He can't wait to show Einstein off to his neighbor. A few weeks later when the neighbor finally comes over, the guy calls Einstein into the house, bragging about how smart he is. The dog quickly comes running and stands looking up at his master, tail wagging excitedly, mouth open, tongue hanging out, eyes bright with anticipation. The guy points to the newspaper on the couch and commands "Fetch!" Immediately, the dog climbs onto the couch and sits, his tail wagging furiously.Then all of a sudden, he stops. His doggie smile disappears. He starts to frown and puts on a sour face. Looking up at his master, he whines, "You think this is easy, wagging my tail all the time? Oy vey... And you think it's easy eating that junk that you call designer dog food? Forget it... it's too salty and it gives me gas. It's disgusting I tell you!" The neighbor is absolutely amazed ... stunned. In astonishment, he says, "I can't believe it. Einstein can speak. Your dog actually talks. You asked him to fetch the newspaper and he is sitting on the sofa talking to us." "I know, I know," says the dog owner. "He's not fully trained yet. He thought I said kvetch."
dog animal joke political joke religion joke Jewish kvetch animal
Rate: Dislike Like
Want to start your day laughing? Register to our Daily Joke! Want to start your day laughing? Register to our Daily Joke!
Did you mean:
Continue With: Facebook Google
By continuing, you agree to our T&C and Privacy Policy
Contact us | Help | About us | Terms | Privacy policy | Categories | Collections