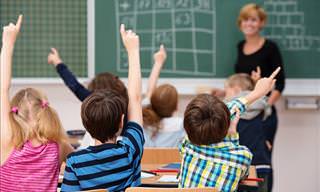 A teacher told her young class to ask their parents for a family story with a moral at the end of it and to return the next day to tell their stories. In the classroom the next day, Joe told his story first, "My dad is a farmer and we have chickens. One day we were taking lots of eggs to market in a basket on the front seat of the truck when we hit a big bump in the road; the basket fell off the seat and all the eggs broke. The moral of the story is not to put all your eggs in one basket." "Very good," said the teacher. Next, Mary said, "We are farmers too. We had twenty eggs waiting to hatch, but when they did we only got ten chicks. The moral of this story is not to count your chickens before they're hatched." "Excellent!" said the teacher again, very pleased with the responses so far. Next, it was Barney's turn to tell his story: "My dad told me this story about my Aunt Karen ... Aunt Karen was a flight engineer in the war and her plane got hit. She had to bail out over enemy territory and all she had was a bottle of whiskey, a machine gun, and a machete." "Go on," said the teacher, intrigued. "Aunt Karen drank the whiskey on the way down to prepare herself; then she landed right in the middle of a hundred enemy soldiers. She killed seventy of them with the machine gun until she ran out of bullets. Then she killed twenty more with the machete till the blade broke. And then she killed the last ten with her bare hands." "Good heavens," said the horrified teacher. "What did your father say was the moral of that frightening story?" "Stay away from Aunt Karen when she's drunk."
teacher school family joke joke about children drunk joke aunt
Rate: Dislike Like
Want to start your day laughing? Register to our Daily Joke! Want to start your day laughing? Register to our Daily Joke!
Did you mean:
Continue With: Facebook Google
By continuing, you agree to our T&C and Privacy Policy
Contact us | Help | About us | Terms | Privacy policy | Categories | Collections