4 Weddings and a Funeral Director 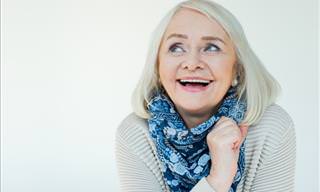 An 80-year-old lady was being interviewed by a local news station because she had just gotten married for the fourth time. The interviewer began to ask her questions about her life, why she has decided to get remarried at 80, and for some information about her new husband. "My husband is a funeral director", she answered. "That's interesting", the reporter replied. The reporter was then curious about her previous three husbands and what their professions had been. After a few minutes of reflection, the woman smiled and answered proudly. She explained that in her 20's she married a banker, in her 40's a circus ringmaster, a preacher in her 60's and now, in her 80's, a funeral director. The reporter was unsure how to process her answer and then asked why she married four men with such different lives and career choices. The woman once again smiled and explained, "I married the first for the money, the second for the show, the third to prepare myself, and the fourth to go!"
senior interview senior joke silly joke reporter funeral director
Rate: Dislike Like
Want to start your day laughing? Register to our Daily Joke! Want to start your day laughing? Register to our Daily Joke!
Did you mean:
Continue With: Facebook Google
By continuing, you agree to our T&C and Privacy Policy
Contact us | Help | About us | Terms | Privacy policy | Categories | Collections