What Bravery is All About 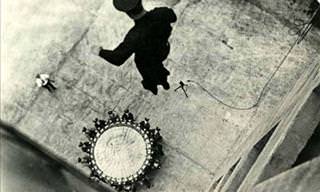 A British SAS squad and an American Marines squad are together in the middle of a city. The commanding officers of each group are discussing the merits of SAS vs Marines: these officers have reputations for being the strongest, toughest and most feared men in the whole of the armed forces. The American squad leader turns to the British officer and says, "My Marines are so much braver than your SAS." "I doubt that very much," says the SAS officer. "They are much braver," says the American. "Watch this." The American squad leader turns to one of his Marines and shouts, "SERGEANT!! Climb to the very top of that building and jump off." "SIR, YES SIR," shouts the sergeant. The sergeant runs inside the building, runs to the top and without a second's thought, jumps off the top of the building and smashes into the ground. He survives, but is very badly injured and gets taken away on a stretcher. The American leader turns to the SAS officer and says, "Now that's bravery." "Yeah? Well watch this," says the British officer. He turns to his men and bellows at the top of his voice, "YOU, PRIVATE, CLIMB TO THE TOP OF THAT BUILDING AND JUMP OFF." The private looks at the officer and says, "Sir, go screw yourself, sir. The Officer turns around to the American and says, "You see? THAT'S bravery."
American Military joke bravery British
Rate: Dislike Like
Want to start your day laughing? Register to our Daily Joke! Want to start your day laughing? Register to our Daily Joke!
Did you mean:
Continue With: Facebook Google
By continuing, you agree to our T&C and Privacy Policy
Contact us | Help | About us | Terms | Privacy policy | Categories | Collections