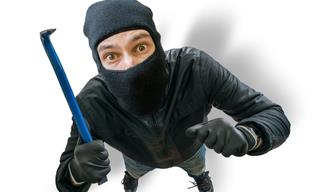 An elderly woman had just returned to her home from an evening worship service and was startled to find an intruder in her house! Catching the man in the act of burglarizing her home, she yelled, "STOP! Acts 2:38!" ("Repent and be baptized, every one of you, in the name of Jesus Christ so that your sins may be forgiven.") When the burglar heard this, he stopped dead in his tracks, blanched and raised two shaking hands. The woman quickly called the police and told them exactly what happened. They arrived minutes later with sirens blaring. Several officers strode in and took the unresisting man into custody. As he was placing the handcuffs on the burglar, one of the officers asked, "Why did you just stand there? All the lady did was mention a scripture verse." "Scripture? What scripture??" replied the confused burglar. "She said she had an axe and two 38s!"
burglar religion joke police bible officer stop acts worship verse scripture blanched
Rate: Dislike Like
Want to start your day laughing? Register to our Daily Joke! Want to start your day laughing? Register to our Daily Joke!
Did you mean:
Continue With: Facebook Google
By continuing, you agree to our T&C and Privacy Policy
Contact us | Help | About us | Terms | Privacy policy | Categories | Collections