A Bee Attends a Bar Mitzvah 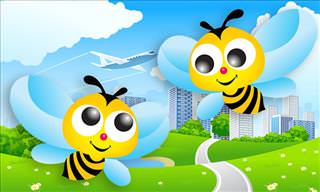 Two bees ran into each other. The first bee asked the other how things were going. "Really bad," said the second bee. "The weather has been really wet and damp and there aren't any flowers or pollen, so I can't make any honey." "No problem," said the first bee. "Just fly down five blocks and turn left. Keep going until you see all the cars. There's a Bar Mitzvah going on and there are all kinds of fresh flowers and fruit." "Thanks for the tip," said the second bee, and he flew away. A few hours later, the two bees ran into each other again. The first bee asked, "How'd it go?" "Great!" said the second bee. "It was everything you said it would be." "Uh, what's that thing on your head?" asked the first bee. "That's my yamaka," said the second bee. "Why do you have it on, you're not Jewish." "No, but I didn't want them to think I was a wasp."
animal joke silly joke religion joke wasp bee Bar mitzvah animal
Rate: Dislike Like
Contact us | Help | About us | Terms | Privacy policy | Categories | Collections