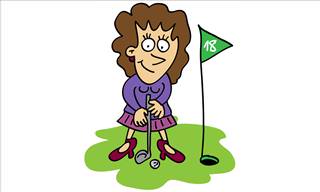 A woman joins a country club and one day hears the guys talking about their golf round. She says, "I played on my college's golf team. I was pretty good. Mind if I join you next week?" No one wants to say 'yes', but they're on the spot. Finally, one man says, "Okay, but we start at 6:30 am." He figures the early tee-time will discourage her. The woman says this may be a problem and asks if she can be up to 15 minutes late. They roll their eyes, but say, "Okay." She's there at 6:30 am sharp and beats all of them with an eye-opening 2-under par round. She's fun and pleasant and the guys are impressed. They congratulate her and invite her back the next week. She smiles, and says, "I'll be there at 6:30, or 6:45." The next week she again shows up at 6:30 sharp. Only this time, she plays left-handed. The three guys are incredulous as she still beats them with an even par round, despite playing with her off-hand. They're totally amazed. They can't figure her out. She's very pleasant and a gracious winner. They invite her back again, but each man harbors a burning desire to beat her. The third week, she's 15 minutes late, which irritates the guys. This week she plays right-handed and narrowly beats all three of them. The men grumble that her late arrival is petty gamesmanship on her part. However, she's so charming and complimentary of their strong play, they can't hold a grudge. This woman is a riddle no one can figure out. After the game they decide to have a couple of beers in the Clubhouse. Finally, one of the men asks her, "How do you decide if you're going to golf right-handed or left-handed?" The lady blushes, and grins. "Well I'm ambidextrous," she replies. "I like to switch back and forth. When I got married after college, I discovered my husband always sleeps in the nude. Right before I leave in the morning for golf practice, I pull the covers off him. If his willy points to the right, I golf right-handed; if it points to the left, I golf left-handed." The guys think this is hysterical and burst into laughter. Astonished at this bizarre information, one of the them asks, "What if it's pointing straight up?" "Then I'm fifteen minutes late."
marriage joke nude golf joke 15 minutes switch pointing back and forth left handed straight up ambidextrous
Rate: Dislike Like
Want to start your day laughing? Register to our Daily Joke! Want to start your day laughing? Register to our Daily Joke!
Did you mean:
Continue With: Facebook Google
By continuing, you agree to our T&C and Privacy Policy
Contact us | Help | About us | Terms | Privacy policy | Categories | Collections