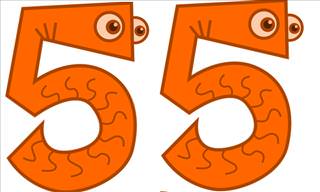 I was walking down the street a few days ago I happened upon my good friend Tim. I waved him over and told him I had the craziest dream the other night. Tim listened as I told him that the dream consisted of just one thing. A huge, bright, number -5-. It was made of gold and shined like the sun. Tim's eyebrows went up with curiosity. I continued to tell him that the first thing I did that day was to look up the local horse racing track contenders. Tim raised an eyebrow. I told him that the number 5 contender in the 5th race was named "The Fifth Element." Tim started grinning. Then I told him of what I did to make sure I get my luck working in my favor. I ate 5 bowls of cereal for breakfast and drank 5 cups of orange juice I went for a 5 mile jog to feel good. I spent 5 minutes in the shower washing off. I dressed in the 5th shirt I found. I sat in my car for 5 minutes before beginning to drive, then I drove to the racetrack and parked in the 5th stall in the 5th row. I entered through the 5th admissions gate and bought 5 programs. I went to the 5th betting window and bet $555 on the 5th horse in the 5th race. I went and sat in the 5th row of the bleachers making sure there were 5 people sitting on both sides of me. I settled in and waited for the race to start. "Well," said Tim. "Did your horse win??!?" I frowned at Tim and said, "Stupid horse came in 5th."
animal joke horse racing five betting animal
Rate: Dislike Like
Want to start your day laughing? Register to our Daily Joke! Want to start your day laughing? Register to our Daily Joke!
Did you mean:
Continue With: Facebook Google
By continuing, you agree to our T&C and Privacy Policy
Contact us | Help | About us | Terms | Privacy policy | Categories | Collections