When a Gyno Becomes a Mechanic 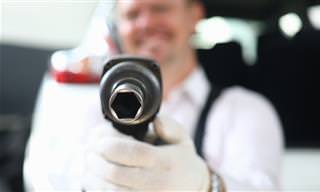 A gynecologist was getting sick of his job and decided that he needed a career change. He'd always enjoyed tinkering with engines so thought he'd become a mechanic. So he went along to mechanics school and the final test was to strip the engine completely and reassemble it - obviously back into perfect working order. So our gynecologist friend did the test and anxiously awaited the result. The day he received the results he got quite a surprise, he got 150%! He quickly phoned the instructor and queried the mark. The instructor said: "no, no that's right. First I gave you 50% for stripping down the engine - a very thorough job. Next I gave you 50% for reassembling it - a fantastic job really, and then I gave you a 50% bonus for doing it all through the muffler."
doctor joke mechanic gynecologist muffler
Rate: Dislike Like 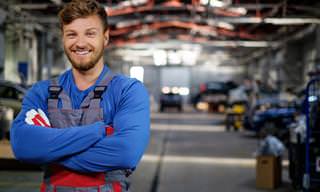 After 20 years of work, a successful gynecologist had become fed up with malpractice insurance and HMO paperwork, and decided that, even though this is all he knew, he would seek new career for himself. Hoping to try a career where skillful hands would be beneficial, he decided to become a mechanic, as working in a garage is always something he thought he might be good at. He went to the local technical college, signed up for evening classes, attended diligently, and learned all he could. When the time of the practical exam approached, the gynecologist prepared carefully for weeks, and completed the exam with tremendous skill. When the results came back, he was surprised to find that he had obtained a score of 150%. Fearing an error, he called the Instructor, saying, “I don’t want to appear ungrateful for such an outstanding result, but I wonder if there is an error in the grade?” The instructor said, “During the exam, you took the engine apart perfectly, which was worth 50% of the total mark. You put the engine back together again perfectly, which is also worth 50% of the mark.” After a pause, the instructor added, “I gave you an extra 50% because you did it all through the muffler, which I’ve never seen done in my entire career.”
mechanic gynecologist muffler exam
Rate: Dislike Like
Want to start your day laughing? Register to our Daily Joke! Want to start your day laughing? Register to our Daily Joke!
Did you mean:
Continue With: Facebook Google
By continuing, you agree to our T&C and Privacy Policy
Contact us | Help | About us | Terms | Privacy policy | Categories | Archive | Collections
Login
Already registered?
Enter your email address and get full access.
Did you mean:
Not a member? Click Here
Personal Details