What Is This Contractor Doing? 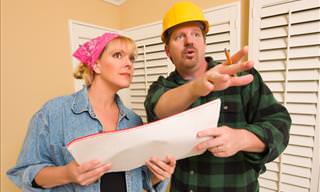 A woman hired a contractor to repaint the interior of her house. The woman walked the man through the second floor of her home and told him what colors she wanted for each room. As they walked through the first room, the woman said, "I think I would like this room in a cream color." The contractor wrote on his clipboard, walked to the window, opened it and yelled out, "Green side up!" He then closed the window and continued following the woman to the next room. The woman looked confused, but proceeded with her tour. "In this room, I was thinking of an off blue." Again, the contractor wrote this down, went to the window, opened it and yelled out, "Green side up!" This baffled the woman, but she was hesitant to say anything. In the next room, the woman said she would like it painted in a light rose color. And once more, the contractor opened the window and yelled, "Green side up!" Struck with curiosity, the woman mustered up the nerve to ask, "Why do you keep yelling 'Green side up' out of my window each time I tell you what color I'd like a room?" The contractor replied, "Because I have a crew of blondes laying turf across the street."
blond joke contractor green side up
Rate: Dislike Like
Puns
Today I learned that the Pentagon was supposed to be the Octagon.
But the contractor kept cutting corners.

How Many Years Did I Live Again? 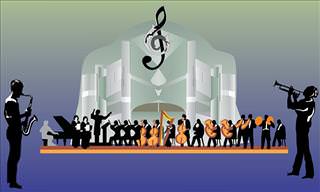 A contractor dies in a car accident on his 40th birthday and finds himself at the Pearly Gates. A brass band is playing, the angels are singing a beautiful hymn, there is a huge crowd cheering and shouting his name, and absolutely everyone wants to shake his hand. Just when he thinks things can't possibly get any better, Saint Peter himself runs over, apologizes for not greeting him personally at the Pearly Gates, shakes his hand, and says, "Congratulations son, we've been waiting a long time for you." Totally confused and a little embarrassed, the contractor sheepishly looks at Saint Peter and says "Saint Peter, I tried to lead a God-fearing life, I loved my family, I tried to obey the 10 Commandments, but congratulations for what? I honestly don't remember doing anything really special when I was alive." "Congratulations for what?" says Saint Peter, totally amazed at the man's modesty. "We're celebrating the fact that you lived to be 160 years old! God himself wants to see you!" The contractor is awestruck and can only look at Saint Peter with his mouth wide open. When he regains his power of speech, he looks up at Saint Peter and says "Saint Peter, I lived my life in the eternal hope that when I died I would be judged by God and be found to be worthy, but I only lived to be forty." "That's simply impossible son," says Saint Peter. "We've added up your time sheets."
son business joke heaven joke contractor st. peter confused impossible time sheet obey commandments fact
Rate: Dislike Like
Want to start your day laughing? Register to our Daily Joke! Want to start your day laughing? Register to our Daily Joke!
Did you mean:
Continue With: Facebook Google
By continuing, you agree to our T&C and Privacy Policy
Contact us | Help | About us | Terms | Privacy policy | Categories | Archive | Collections
Login
Already registered?
Enter your email address and get full access.
Did you mean:
Not a member? Click Here
Personal Details