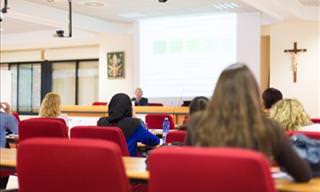 An eleven-year-old Jewish boy was failing math. His parents tried everything from tutors to hypnosis; but to no avail. Finally, at the insistence of a family friend, they decided to enroll their son in a private Catholic school. After the first day, the boy's parents were surprised when he walked in after school with a stern, focused and very determined expression on his face. He went straight past them, right to his room and quietly closed the door. For nearly two hours he toiled away in his room - with math books strewn about his desk and the surrounding floor. He emerged long enough to eat, and after quickly cleaning his plate, went straight back to his room, closed the door and worked feverishly at his studies until bedtime. This pattern of behavior continued until it was time for the first quarter's report card. The boy walked in with it unopened - laid it on the dinner table and went straight to his room. Cautiously, his mother opened it and, to her amazement, she saw a large black 'A' under the subject of Math. Overjoyed, she and her husband rushed into their son's room, thrilled at his remarkable progress. "Was it the nuns that did it?" the father asked. The boy shook his head and said "No." "Was it the one-to-one tutoring? The peer-mentoring?" "No." "The textbooks? The teachers? The curriculum?" "No", said the son. "Then what was it??" "Well, on that first day, when I walked in the front door and saw that guy nailed to the plus sign, I KNEW they meant business!"
teacher school boy school joke religion joke Jewish catholic student parents christian
Rate: Dislike Like
Grandpa's Advice Was So Awesome 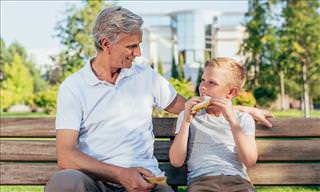 I hope that this will once again confirm that the most important information in your life won't come from a teacher, the library or the internet, but from a mentor, and on a very personal level. My long-passed grandfather's birthday is coming up, and for me, it is a time to reminisce. The long walks we used to take. The long drives. The special trips he would make to pick me up so I could spend weekends with him, and the advice he used to give! Much was wasted because I was young when he died. If he were alive today and sharing his pearls of wisdom, I'd be a better man. Those gems were well and good, but the one I remember most, the jewel in the crown of grandfatherly advice, came when I was 12. We were sitting on a park bench eating a sandwich, watching children and their mothers enjoying a beautiful spring day. He told me that one day, I'd find a woman and start my own family. "And son," he said, "be sure you marry a woman with small hands." "How come, Grandpa?" I asked. "It makes your pecker look bigger."
rude joke grandpa advice small hands
Rate: Dislike Like
Funny Family Poems
"Nobel Prize for Mothers"

Mom, you are a shining star
Though the world doesn't know your name.
You have no fancy title
Like Baroness or Dame.

Mom, you really are a star,
My mother, mentor, and friend.
A Nobel Prize for motherhood,
Is what I'd recommend!

And if I won the lottery
I'd share my win with you
I'd take you Mom on a spending spree
Each day the whole year through!