Break it Up, People! 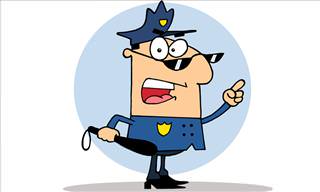 A rookie police officer was assigned to ride in a cruiser with an experienced partner. A call came over the car's radio telling them to disperse some people who were loitering. The officers drove to the street and observed a small crowd standing on a corner. The rookie rolled down his window and said, 'Let's get off the corner.' No-one moved, so he resorted to the loudspeaker. 'Let's get off the corner!' it boomed. Still, no-one seemed to take any notice. 'Alright folks, if you don't move after I count to three, I'm breaking out my baton!' the rookie cried. Intimidated, the group of people began to leave in a hurry, casting puzzled glances in his direction. Proud of his first official act, the young policeman turned to his partner and asked, 'Well, how did I do?' 'Pretty good,' replied the veteran, 'especially since this is a bus stop.'
cop police joke stupidity joke rookie bus stop
Rate: Dislike Like
Want to start your day laughing? Register to our Daily Joke! Want to start your day laughing? Register to our Daily Joke!
Did you mean:
Continue With: Facebook Google
By continuing, you agree to our T&C and Privacy Policy
Contact us | Help | About us | Terms | Privacy policy | Categories | Collections