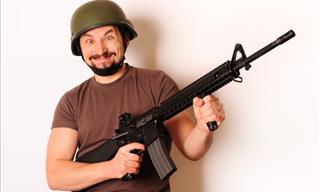 A general noticed one of his soldiers behaving oddly. The soldier would pick up any piece of paper he found, frown and say, "That's not it" and put it down again. This went on for some time, until the general arranged to have the soldier psychologically tested. The psychologist concluded that the soldier was deranged, and wrote out his discharge from the army. The soldier picked it up, smiled and said, "That's it."
soldier general psychologist army joke smile paper frown military deranged discharge conclude
Dislike Like
Contact us | Help | About us | Terms | Privacy policy | Categories | Collections