A Touch of Christmas Humor - Hilarious!

And for that purpose, look no further than these hilarious Christmas cartoons! A Touch of Christmas Humor - Hilarious! photos, funny, Christmas, cartoons Here we've collected for you a series of funny Christmas cartoons for you to enjoy and to share with your family and friends! 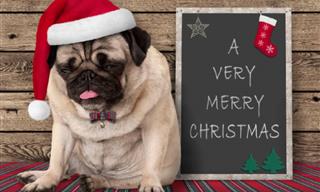 Hilarious - Christmas Is Nigh and These Pets Are NOT Ready

Christmas may feel a bit different this year, but many families are already putting up festive decorations and decorating the Christmas tree. Can you sense the festive spirit in the air? These costume-wearing pets sure do, but they’re not too happy about it and it’s absolutely hilarious! 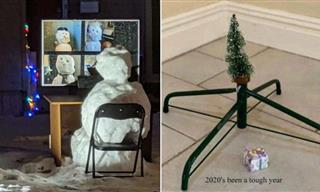 Here are 20 photos that demonstrate how humor managed to keep Christmas 2020 hilariously fun! 1. The 12 days of Christmas but make it Coronavirus related Image Source: acidcow 2. Meeting Santa this year hasn't been quite right... Image Source: izismile 3. Indeed it has... 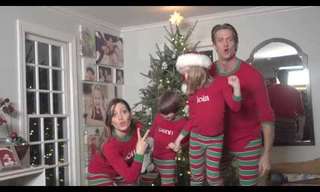 One Family's Idea of a Christmas Song - Hilarious!

None so much as this joyous family, who have decided to kill 2 birds with 1 stone - make a nifty Christmas rap song to all their friends and family, and also make a bit of a commercial for their business. We don't mind because the kids are so darn cute, and the song is just hilarious. 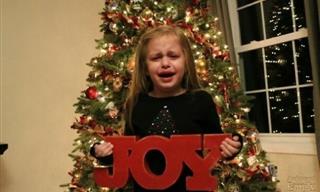 "This was supposed to be our Christmas card. It turns out she just hated that sweater.” Image Source: Awkward Christmas Photos/ Instagram Related Article: Cats and Dogs Cause Christmas Carnage 4. Matching ugly Christmas sweaters are so last year - but ugly maid costumes are in! 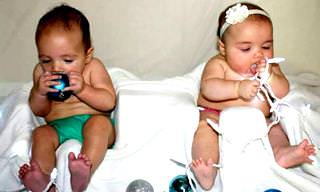 Take a look at these hilarious fails to see exactly what I mean: [related_articles] Photoshoots With Kids Never Really Go As Planned... funny, hilarious, fails, humor, babies, merry christmas, photoshoot, cute photos While many of us think that it would be a great idea to have a photoshoot with our 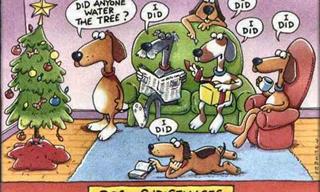 Hilarious: These Christmas Funnies Made Me Laugh Out Loud

Christmas is upon us and with all the celebrating, we mustn't forget that Santa encourages us to have a big belly laugh, why would he HO HO HO, otherwise?! And so in the spirit of St. 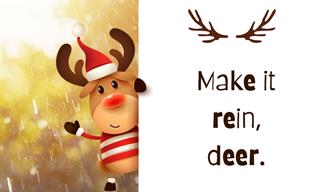 Sleigh Yourself With Laughs With These Christmas Puns

It's beginning to look a lot like Christmas . The weather is getting colder and plans for cozy family get-togethers are taking shape again. The best thing about those gatherings is being able to share light moments and crack some silly jokes with your loved ones. 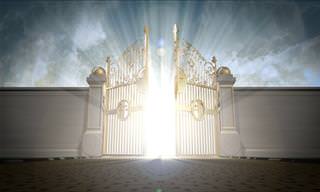 Joke: The Spirit of Christmas

At the Pearly Gates they're greeted by Saint Peter Saint Peter says to them: "I will let you into heaven if you can show me a spirit of Christmas." The first man pulls out a leaf from his pocket and says "This represents the Christmas tree." 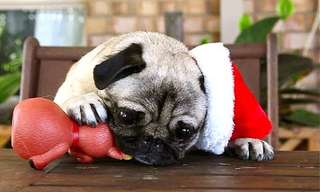 Here are some of the cutest Christmas animals in photographs and video from around the web. You make think that their owners are crazy, but we think they are geniuses for coming up with such cute photos! A Cute-As-Can-Be Christmas! 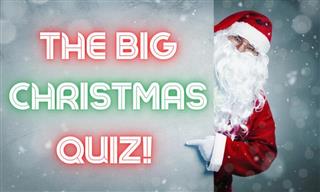 Content Can You Solve the Great CHRISTMAS Quiz? quiz Do you feel like you know enough about this holiday of holidays to beat our big Christmas Quiz? 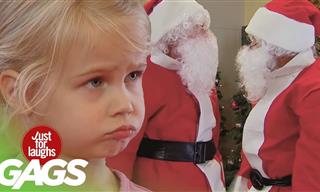 Christmas is here and it’s time to add some laughter to your festive season with this hilarious prank compilation. From Christmas trees that literally grow in seconds to Santas fighting for attention, these Christmas pranks will keep you chuckling as you get ready for the holidays. 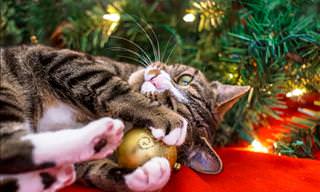 These Cats Really Are Excited for Christmas

Christmas, as the saying goes, is 'the most wonderful time of the year'. However, if you think that it's only us humans who get excited about Christmas then it's time to think again, as here are 18 photos which show that cats enjoy Christmas (especially Christmas Trees) just as much as we do. 1. 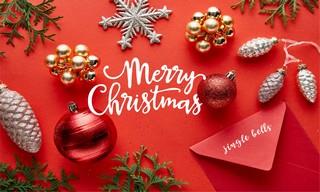 Get Into the Holiday Spirit With This Christmas Collection

Here are 15 weird Christmas traditions from around the world that you may have never heard of! WATCH: Simon's Cat Christmas Compilation Click Here to Read the Article Christmas is such a beautiful time of the year for us humans but it's a Christmas for cats too! 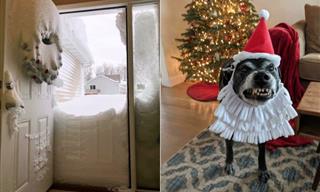 The holiday season in 2020 was just not the same as usual, as we’ve already exemplified in a previous article - Hilarious Photos - 2020 Christmas Edition . 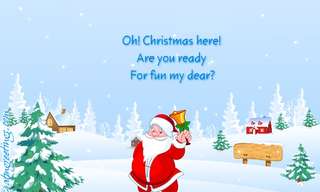 Merry Christmas to Us All!

I have a few wishes for this Christmas, and among the top of that list is for you, your family and friends to have a very very merry one! M E R R Y C H R I S T M A S ! Merry Christmas to Us All! 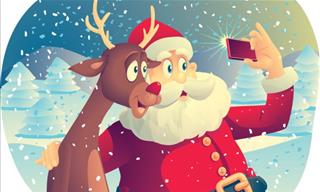 Twas the night before Christmas and throughout the substation, Not a deputy stirred, they were all on vacation. The stockings were hung on the wall with great care, Next to some T-shirts and old underwear. I was working the night shift compiling stats, Answering the phone, and feeding the rat. 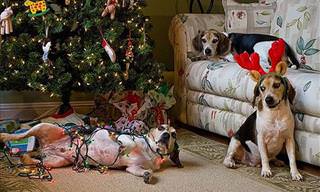 They prefer to use the Christmas trees as their personal hammocks and even tear through some of the well-wrapped presents. Get ready to deck the halls with laughter when you see these 21 mischievous pets... 1) Who Opened All the Presents on Christmas Morning?! 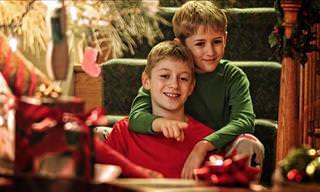 These Are The Things I Will NOT Wish You This Christmas...

There are loads of things I would like you to receive this Christmas, more than I could ever express. 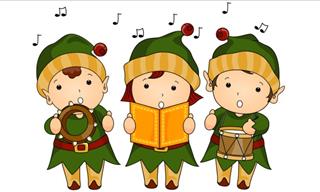 Take a CHRISTMAS QUIZ This Holiday!

Christmas is a time for joy and heavenly music. There have been so many beautiful Christmas songs and hymns to enjoy. Most recognizable of these are, of course, the Christmas carols, which we enjoy every year. But do you know the actual words well enough to complete our Christmas Quiz? 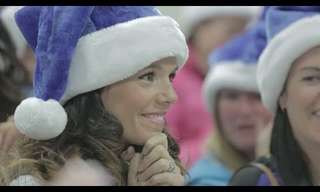 A Christmas Miracle in an Unexpected Place!

It's probably the last thing that would ever come to mind, but what if an airline could make your Christmas dreams come true? That's what WestJet, a low-cost air carrier in Canada, did for its passengers this Christmas. 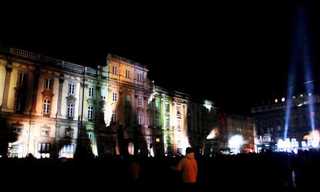 The Beautiful Christmas Streets of Lyon!

It is an old Lyon tradition to have a great spectacle of lights on Christmas. Well, this time, we feel that the French have really created something that is magical to watch! The Beautiful Christmas Streets of Lyon! 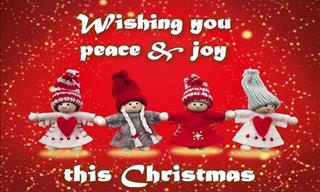 These Holiday Greetings Are Perfect for Christmas! 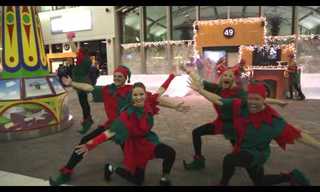 A Real Show of Christmas Spirit...

Christmas is a great holiday, but sometimes travelling on the busy holiday season can be vexing, tiring and annoying. On December 4, this Canadian airline decided to surprise 166 guests waiting to board a Calgary-Toronto red-eye flight with a little Christmas cheer.