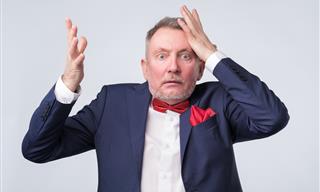 Three retired gentlemen were sitting together, having coffee and talking about their life's experiences. Then one of the suggests they each relate their most exciting experience. The first, a retired sheriff, described the terrifying excitement of a shoot-out with Bonnie and Clyde back in his younger days. The other gents nodded and agreed that, indeed, would have been exciting. The second, a retired fireman, related the tale of a huge fire at the university several years back. There were flames, fire trucks from several area fire departments, and many damsels in distress to save. The others gents agreed that had to be a very exciting time. The third, a retired undertaker, started, “One night I got a call from the local Hilton hotel to pick up a body. I get to the room with the body, which was under a sheet. So far so good, but when I got a look at the corpse, I had a problem. It had a huge... bulge, if you know what I mean. I knew there was no way I could get him through the lobby like that. So I found an old broom and whacked that bulge just as hard as I could to make it go down.” He paused. The retired fireman asked, “ah... no offense, but how was that exciting?” The undertaker sighed and said, “Turns out... I was in the wrong room.”
rude joke dark humor funeral joke sheriff hotel undertaker seniors retired erection. bonnie and clyde gents
Rate: Dislike Like
Want to start your day laughing? Register to our Daily Joke! Want to start your day laughing? Register to our Daily Joke!
Continue With: Facebook Google Use Email
By continuing, you agree to our T&C and Privacy Policy
Contact us | Help | About us | Terms | Privacy policy | Categories | Collections