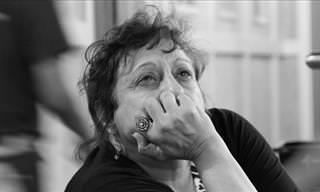 Karen lost her husband almost four years ago and still hadn't gotten out of her mourning stage. Her daughter was constantly calling her and urging her to get back into the dating world. Finally, Karen surrendered. With some courage, she told her family members that she will go out again. That said, she didn't really know anyone suitable. Her daughter immediately replied: "Mom! I have someone for you to meet." Well, it was an immediate hit. They took to one another, and, after dating for six weeks, he asked her to join him for a weekend in the Catskills. Their first night there, she undressed as he did. There she stood nude except for a black bra and a pair of black lacy panties, and he in his birthday suit. Looking at her he asked: "Why the black underwear?" She replied: "My breasts you can fondle, my body is yours to explore, but down there I am still in mourning." He knew he wasn't getting lucky that night. The following night the same scenario. She was standing there with the black panties on, and he was in his birthday suit ... except that he was wearing a black condom. She looked at him and asked: "What's with this ... a black condom?" "Well." He said, "I wanted to offer my deepest condolences."
rude joke widow funeral joke condolences
Rate: Dislike Like
Want to start your day laughing? Register to our Daily Joke! Want to start your day laughing? Register to our Daily Joke!
Continue With: Facebook Google Use Email
By continuing, you agree to our T&C and Privacy Policy
Contact us | Help | About us | Terms | Privacy policy | Categories | Collections