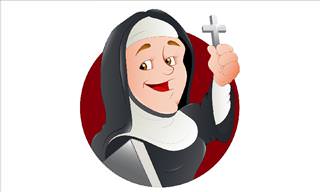 A man suffered a serious heart attack and had bypass surgery. He awakened to find himself in the care of nuns at a Catholic hospital. As he was recovering, a nun asked how he was going to pay the bill. He replied, in a raspy voice, "No health insurance." The nun asked if he had money in the bank. He replied, "No money in the bank." The nun asked, "Do you have a relative who could help you?" He said, "Just a spinster sister, who is a nun." The nun, slightly perturbed, said, "Nuns are not spinsters! Nuns are married to God." The patient replied, "Then send the bill to my brother-in-law."
religion joke God nun comeback joke patient
Rate: Dislike Like
Three Spinsters and a Wish 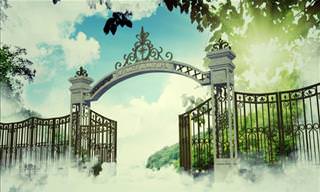 Three old spinsters die and go to heaven and at the Pearly Gates, they are met by St Peter. He says: “Ladies, you all led such wonderful lives that I’m granting you six months to go back to earth and be anyone you want to be.” The first spinster says: “I want to be Sophia Loren.” With a bang, she’s gone. The second says: “I want to be Madonna.” She also disappears immediately. The third says: “I want to be Sara Pipalini.” St Peter looks perplexed. “Who?” he says. “Sara Pipalini,” replies the old spinster. St Peter shakes his head and says: “I’m sorry, but that name just doesn’t ring a bell.” The old woman then takes a newspaper out of her purse and hands it to St Peter. He reads the paper and starts laughing. He hands it back to her and says: “No, my dear woman, the paper says it was the ‘Sahara Pipeline’ that was laid by 1,400 men in 6 months.”
rude joke heaven and hell joke st. peter pearly gates spinster
Rate: Dislike Like
Want to start your day laughing? Register to our Daily Joke! Want to start your day laughing? Register to our Daily Joke!
Did you mean:
Continue With: Facebook Google
By continuing, you agree to our T&C and Privacy Policy
Contact us | Help | About us | Terms | Privacy policy | Categories | Collections