After 20 years of marriage, a wife decides to take her husband, Dave, to a strip club for his birthday. She figures there's no harm in it if she's there with him, after all. They arrive at the club and the doorman says, "Hey, Dave! How ya doin'?" His wife is puzzled and asks if he's been to this club before. "Oh no," says Dave. "He's on my bowling team." When they are seated, a waitress asks Dave if he'd like his usual and brings over a glass of red wine. His wife is becoming increasingly uncomfortable and says,"How did she know that you drink that?" "She's in the Ladies Bowling League, honey. We share lanes with them." A stripper then comes over to their table, throws her arms around Dave, and says "Hi Davey. Want your usual table dance, big boy?" Dave's wife, now furious, grabs her purse and storms out of the club. Dave follows and spots her getting into a cab. Before she can slam the door, he jumps in beside her. He tries desperately to explain how the stripper must have mistaken him for someone else, but his wife is having none of it. She is screaming at him at the top of her lungs, calling him every name in the book. The cabby turns his head and says, "Looks like you picked up a real witch tonight, Dave."
joke about men husband wife marriage joke cheating joke hooker joke strip club stripper
Rate: Dislike Like
Dirty Short Jokes
What do you call a Muslim stripper? youseen memuff
My Son Is Better Than Yours 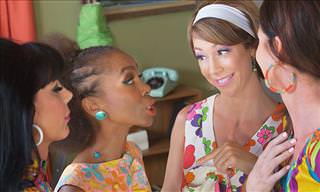 John worked hard for his living and his wife decided that he deserved a treat for his birthday, so she blindfolded him and took him to a local strip club. The doorman at the club greeted them and said, "Hey, John! How ya doin?" Once inside, his wife removed the blindfold but she was puzzled and asked if he'd been to this club before. "Oh no," said John. "He's one of the security guys I meet on my business trips." When they were seated, a waitress asked John if he'd like his usual and brought over a Budweiser. His wife was becoming increasingly uncomfortable and said, "How did she know that you drink Budweiser?" "I recognize her, she's the waitress at the bar around the corner from work. I always drop in and have a Bud on Fridays, honey.” A stripper then came over to their table, threw her arms around John, started to rub herself all over him and said, "Hi Johnny. Want your usual table dance, big boy?" John's wife, now furious, grabbed her purse and stormed out of the club. John followed and spotted her getting into a cab. Before she could slam the door, he jumped in beside her.John tried desperately to explain how the stripper must have mistaken him for someone else, but his wife was having none of it. She was screaming at him at the top of her lungs, calling him every four letter word in the book. The cabby turned around and said, "Geez John, you picked up a real piece of work this time."
marriage joke cheating joke cab driver strip club
Rate: Dislike Like
Contact us | Help | About us | Terms | Privacy policy | Categories | Collections