35 of the funniest puns about that Turkish holiday! Or is it a turkey holiday? I always get them confused...

Me: Tomorrow is Black Fry day.
What is a mathematician's favorite part of a big Thanksgiving feast?
Pumpkin pi.
Who is never hungry on Thanksgiving?
The turkey, because he’s already stuffed!
My Aunt with half a plate left: I don't think I can eat anymore, this meat is just not appealing to me.

Me: Have a potato, it has a peal.
What do you call a turkey after Thanksgiving?
Lucky.
Are you enjoying your sweet potatoes this Thanksgiving?
I know I yam!
Hey son, do you know why the pilgrims ate biscuits at the first Thanksgiving?
Because they had a boatload of May-flour.
Did you hear about the Thanksgiving turkey who tried to escape the roasting pan?
He was foiled.
Grandmother is making the dressing, and is adding several cans of Chicken Broth.

He was promptly kicked out of the kitchen.
If you can’t decide which side to take to Thanksgiving.
Bringing your side piece is guarenteed to cause drama.
I was picking through the turkeys at the grocery store for Thanksgiving Day, but I couldn't find one big enough for my family. I turned to the employee and asked, "Do these turkeys get any bigger?"
“No, sir," he replied. "They're dead."
My neighbor drank so much gravy on a Thanksgiving Day dare that he choked to death.
He went from the ladle to the grave.
What is a teddy bear’s favorite Thanksgiving food?
Stuffing!
I went to the butcher's the other day and asked them, how do you prepare your turkey for Thanksgiving?
They said that they just tell them straight out that you're gonna die.
Send to friends Share WhatsApp
Collections 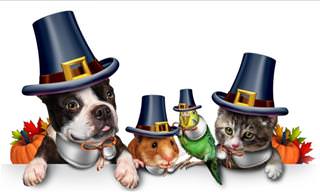